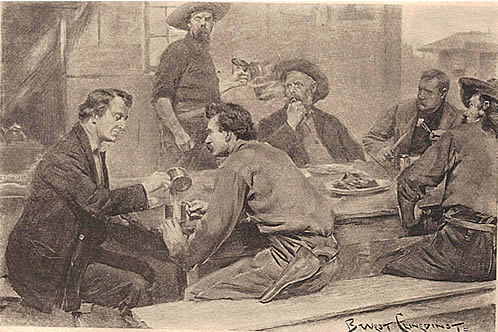 I’ve recently come to the conclusion that Mark Twain is best read in dog-eared, mass-market paperback. You can keep your fancy collectable and critical editions — no point wearing white tie and tails to a hootenanny. That said, I once maintained more elevated bibliophilic tastes and over the years owned various pseudo-deluxe Twain anthologies such as the Folio Society’s shiny slipcased Treasury and a tall, half-leatherette collection from Readers Digest. My shelves once displayed a handsome pair of blue and grey cloth volumes (Huckleberry Finn and Tom Sawyer) liberated from a Nelson-Doubleday set of complete novels. But my attitude changed recently when I read Roughing It in handy, democratic paperback format on the Brussels-Paris Megabus route. It did fine. Shortly after that, back home in Edinburgh, I decided to sell my copy of the unexpurgated Autobiography (the first pedantically annotated volume of three). The book dealer was admiring but despaired of its massive bulk and, with apologies, refused to take it. No shelf space.

Roughing It may be a hefty six hundred pages but, like all Twain’s travel books, should ideally fit in your pocket. Sure, the Iowa-California critical edition of 1972 features an excellent map of the American southwest on its endpapers, but it’s too cumbersome for the bus and especially the Megabus — and the stagecoach, for that matter. This is a book to read on your own travels or while lying on the beach. Tolerant of extended gaps in reading, it’s useful to have on hand for an idle moment.

Twain wrote his various books of comic memoir out of order. Roughing It narrates a fanciful version of his “variegated vagabondizing” from 1861-67, chronologically following the period he would eventually set down in Life on the Mississippi (1883), the story of his early manhood. In 1861 Twain went west with his brother Orion Clemens, newly crowned Secretary to the Nevada Territory. Twain covers episodes from his ill-fated career prospecting for gold and silver, his days as an often-desperate newspaper columnist in Virginia City, and his arrival in San Francisco. The book is relaxed enough to include such asides as a contemptuous history of the Mormon church. The last chunk of the book recounts his travels to Hawaii (then known as the Sandwich Islands) in 1866. Plenty of humorous chapters can be read as self-contained fictions — ‘Buck Fanshaw’s Funeral’, ‘Bemis Finds Refuge in a Tree’, the story of the bandit Slade.

Roughing It is endlessly interested in the details of how things worked. “Information appears to stew out of me naturally, like the precious ottar of roses,” he writes. Here is the Old West in all of its grit, hardship, and natural majesty. It is not, as Twain puts it, “a pretentious history or philosophical dissertation.” Nor does it dwell on his personal life or development throughout these years. For that reason it pleasantly, rather than compellingly, rambles from place to place, adventure to adventure, joke to joke. The extended Hawaiian section, largely reworked from newspaper articles, would really be more suited to a separate book (the original articles were indeed posthumously  published as Letters from Hawaii in 1966). A reasonably satisfying conclusion to Roughing It is provided by Twain’s first success as a lecturer back in San Francisco, although ‘lecturer’ may be misleading; by the account here, he was a prototypical stand-up comic. The book itself, like a string of routines, endlessly delivers the punchlines. The young Twain’s observations and exaggerations are grotesquely racist on occasion, more concerned with pandering to the prejudices of his nineteenth century readership for laughs than with anything else.

I’m surprised this big baggy book has not been more frequently adapted for film and television. There’s no shortage of dramatic episodes, ambuscades, and ironic reversals — all set in the epic landscapes of the American southwest. A fine comic western could be strung together from this raw material.

Twain rarely flags as an entertainer, but this kind of episodic book inevitably tempts anthologists to dig for choice nuggets. In addition to Life on the Mississippi, Twain wrote three travel memoirs in a similarly expansive and picaresque format: The Innocents Abroad (1869), A Tramp Abroad (1880), and Following the Equator (1897). Charles Neider was the prominent Twain anthologist of the mid-20th century (in 1959 he edited the most readable version of the Autobiography from that mountain of rambling dictations more recently published verbatim, and in that unwieldy and shelf-clogging format, by the University of California). Neider selected his preferred moments from all five memoirs and put together 450 pages as The Travels of Mark Twain (1960). For casual Twain readers, backpackers and bus riders, it might be just right — and it is available in paperback.